With Her First Book, “Body Talk,” Katie Sturino Pushes Body Acceptance For All 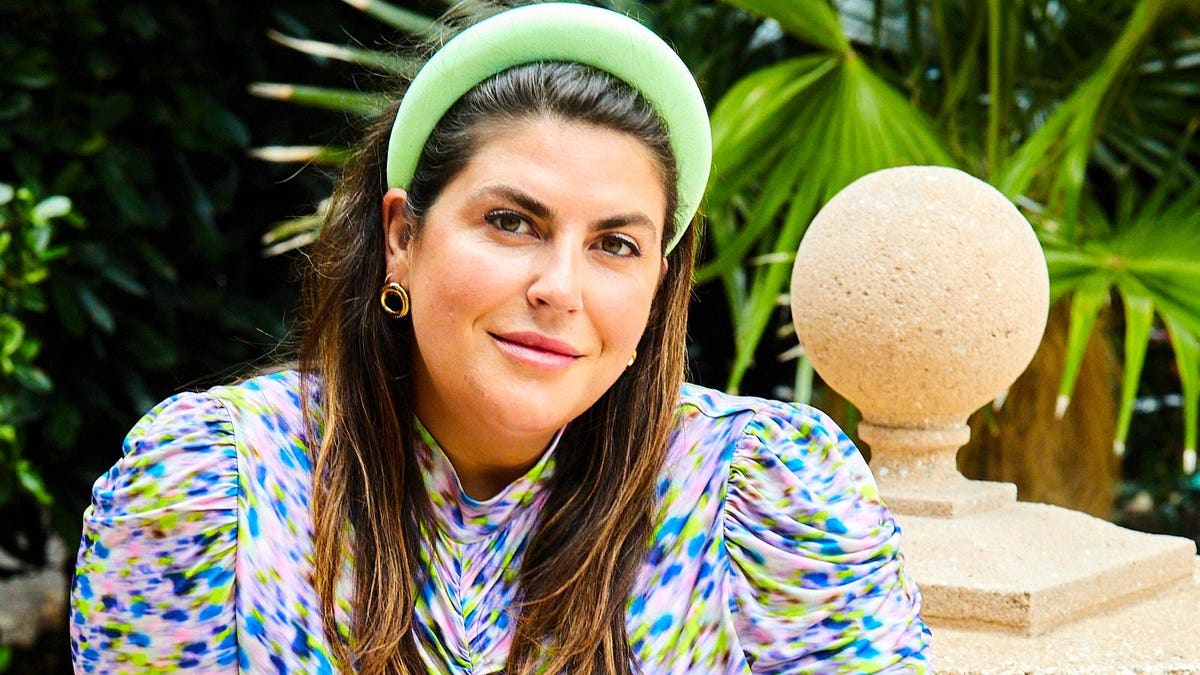 
To call Katie Sturino an influencer feels like the ultimate misnomer. After all, the 37-year old is the founder of cult-favorite beauty brand Megababe, the brain behind the size-inclusive fashion blog The 12ish Style, the host of the “Boob Sweat” podcast, and momager to some of the internet’s most beloved dogs. But she is nothing if not influential.

To her more then 580,000 Instagram followers, Sturino is the hilarious, down-to-earth style icon, who calls attention to the uncomfortable conversations and experiences the rest of us actively avoid and isn’t afraid to say what we’re all secretly thinking. Her career has been defined by unabashed confidence and unwavering fearlessness—whether she’s powdering her décolletage in Megababe’s sweat-absorbing Body Dust or challenging a brand’s lackluster size range in her recurring #MakeMySize series—and she’s made it her mission to bestow all women with the same sort of radical self-acceptance.

Sturino uses her platform to shine a light on the moments that are usually left in the dark, like the constant dread of trying on jeans, the struggle to zip a dress that seems determined not to budge, the realities of summer thigh chafing, and gaining weight after a breakup. And while much of her content comes from her own frustration with societal body standards and her personal journey to body acceptance, the impact it’s had on the women (and men) who follow her has been profound, regularly reminding them that they are not alone and urging them to not be so hard on themselves.

But after several years of successfully helping people around the world to build better relationships with their bodies, Sturino wanted to take the lessons on her Instagram offline and to give them more real-life application, which she believed would be best achieved through a book. “I knew I didn’t want to write a memoir because that just felt like an unnecessary thing,” she recalls. “But what I wanted to do was take the things I preach about and turn them into what I hope is a program for people to go through that touches on a lot of deep feelings and deep issues that we might not even know are just right there and affect us everyday.” The result is Body Talk, Sturino’s new book that’s part confessional, part workbook out Tuesday.

“This is essentially the culmination of all the work I’ve done with The 12ish Style and Megababe,” the author explains of her debut work. “It’s taking the spirit of everything that I do and turning it into actions that you can actually take for yourself by reading this book cover to cover and doing the homework.”

While Sturino thinks of Body Talk as a roadmap and interactive program for anyone struggling with body acceptance, it was in fact shaped by her own journey. “The most traumatic things that have happened to me in my life are now in this book as little comedy one-pages, so it’s interesting to see these things that used to bother me or trigger me written down with like cartoon headings,” she says with a laugh. “But the program really came from my learning of my own self-acceptance. It really was like, ‘Okay, I got somewhere. How did I get here?’”

Also of undeniable influence on the book is the signature playfulness and sense of humor that her followers (and customers) have come to know and love. With bold and bright colors, bubbly text, and lovable illustrations on every page, Body Talk sets itself far apart from other books on the shelf, especially those that tackle similar subjects. “I hope that it’s fun, and I hope that it feels a little bit silly and light,” Sturino says. “I think that so much of what’s out there in the ‘self-help’ section around body issues is very heavy and serious, and it’s delivered in a way that just doesn’t have much humor, but I’ve always found that the best way to deal with things is with a bit of humor.”

When envisioning the book, Sturino also thought back to her childhood and what she would have liked to hear at the time. “If I had this book when I was little, I think I would have felt a lot less alone. Even if I read this book when I was in high school, it would have made me feel like someone got it and that maybe there was some hope out there,” she explains. “I didn’t have anyone around me whom I could feel comfortable talking about my body with, so I think this book would be amazing for young people like that.”

But as impactful as Body Talk can be for young girls and those first learning about their bodies, Sturino wrote the book for all women, regardless of shape, size, age, or experience. “This is not a size thing,” she says. “This really is for all women because all women have found themselves dealing with body image issues or insecurities at some point or another.”

As Sturino reminds us, though, usually those who’ve been body-shamed have also done some body-shaming, so she hopes her book will help challenge readers to treat both their own and others’ bodies with respect. “The whole body-shaming conversation unfortunately quite often starts with women,” she notes. “Now, do men have something to do with it? Absolutely, there’s a whole patriarchy and system of having women’s value deemed by the way they look, but what’s happened over time is that women uphold that whole system because they don’t know any other way.” If we keep pinning women against each other, asking ‘who wore it better?’ and the like, the author believes the cycle will only continue. “So, I think if women come together and learn not to talk shit about each other and can call out body-shamers, that’s the way that we’ll turn this around,” she says. “If women can change their own attitudes about bodies, then it doesn’t actually matter what men say because they’ll just fall in line.”

Despite her ambitious goals for all of womenkind, however, Sturino feels she’s done her job if even one person comes away from Body Talk with greater self-acceptance. “I think if you do read the book, you’re provided with tools to bring into your real life, and if you do that, I don’t see a way in which you’re getting out of there without taking these learnings with,” she notes. “But if I can help one person change the feelings that they have about themselves, that’s the point of all of it.”