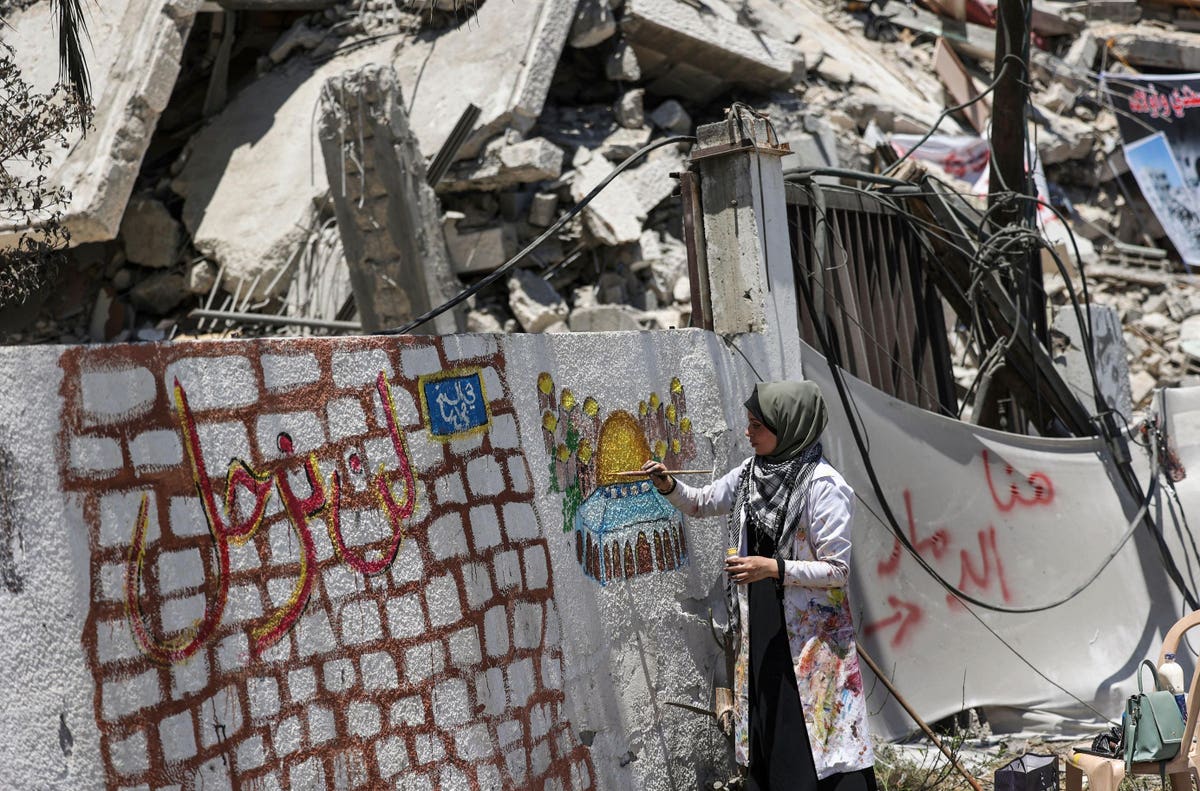 
When the Jerusalemite poet, Mohammed el-Kurd, was 11, Israeli settlers moved into his home. ‘Since then,’ el-Kurd recalls, ‘all that has separated us has been drywall and blankets on a clothesline.’ Twelve years out, el-Kurd’s verbal skirmishes with Western reporters over the ongoing Sheik Jarrah evictions underscore the fact that language separates, too. Each contested word – ‘eviction,’ ‘dispossession,’ ‘squatters,’ ‘colonialist’ – hangs in the air as it might on a neighbor’s clothesline. Palestinian families like el-Kurd’s, first displaced by the Nakba, claim homestead from Hashemite Jordan. Israeli settlers, whose long suits the courts favor, hold Ottoman title. Language, after all, is the landscape of moral precedence in administrative bureaucracies. For the poet-monk, Thomas Merton, all the ‘double-talk, tautology, [and] ambiguous cliché’ of bureaucratic power marks its ‘insatiable appetite’ for ‘the definitive, the final.’ In this regard, it’s worth revisiting British Mandatory Palestine’s provisional bureaucracy and the ‘resistance literature’ of Nuh Ibrahim, whose poems critiqued the hypocrisies and brutalities of the Mandate’s routine administrative entanglements.

In World War I’s wake, Britain assumed ‘tutelage’ over Palestine through a League of Nations mandate. The Mandatory’s raison d’etre, at least on paper, was the provision of ‘administrative advice and assistance’ to ‘communities formerly belonging to the Turkish Empire’ on the road to statehood. Of course, factors other than political altruism made Britain a stakeholder in Palestine. Western ‘Great Powers’ had divided the former Ottoman Empire into zones of influence from Mesopotamia to Palestine. At the same time, Britain had implicated itself in the nationalist aspirations of both Arabs and Jews during WWI. In 1915, the British High Commissioner to Egypt, Sir Henry McMahon, promised the Hashemites land that vaguely included much of Palestine. On the other hand, the 1917 Balfour Declaration announced the Foreign Secretary’s support for a Jewish ‘national home’ in Palestine.

The Mandate, itself, was a strange political establishment. Strictly speaking, Palestine was not part of the British Empire, but it fell under the jurisdiction of the Colonial Office, much to the chagrin of the Foreign Office. The Mandate had antecedent obligations to historical communities of both diasporic Jews and the ‘existing non-Jewish communities in Palestine,’ but within an evolving, vaguely defined framework of a future state. As Albert Hourani, a historian who worked in the Arab Office at the Mandate’s end, remarked, the British Empire had ‘no adequate machinery for forming a policy [in Palestine], no proper coordination between the two different departments concerned with the Arab countries, [and] no central responsibility for decision.’ British archives are replete with the day-to-day preoccupations of Mandate functionaries – Muslim-Christian Associations, the Zionist Commission, bombings, sectarian killings, electrification programs, press reports, and the byzantine tapestries of legal, illegal, and unrecorded land ownership that divided Palestine. But one also gets the distinct sense that Mandate authorities, strategically aimless in a hollow pseudo-state, administered for administration’s sake.

In Waiting for the Barbarians, J.M. Coetzee personifies his make-believe ‘Empire’ as a political monster, describing how ‘one thought alone preoccupies the submerged mind of Empire: how not to end, how not to die, how to prolong its era’ as it ‘sends its bloodhounds everywhere.’ But in the Mandate’s case, the real leviathan’s always changing its mind. In 1938, it’s suppressing Arab revolts with ‘Special Night Squads’ of British commandos partnered with Haganah paramilitaries, hoping for what the Jerusalem’s Military Governor, Sir Ronald Storrs, called a ‘little Jewish Ulster in a sea of potentially hostile Arabism,’ pacified in ‘the Black and Tan tradition.’ By 1940, though, Britain had curtailed Jewish immigration. By 1945, Zionist paramilitaries had assassinated Lord Moyne, Britain’s Secretary of State for the Colonies, and declared open revolt. A year after the Mandate terminated, the Arab-Israeli War concluded with a post-imperial farce of RAF pilots dogfighting British-made Israeli Spitfires piloted by Americans and Canadians.

The Haifa-born poet, Nuh Ibrahim, who died fighting during the 1936-1939 revolt, spent much of his adulthood running afoul of the Mandate. A student of the populist revolutionary cleric, Sheikh Izz al-Din al-Qassam, Ibrahim rose to prominence writing nationalist verse in zajal, a popular Levantine form of folk poetry. Zajal poems are colloquial and improvisational, occupying a fluid space between speech and song with a discursive style of lyrical dueling that that often invites comparisons to freestyle rap battles. Absent a lyrical ‘rival,’ individual compositions are still subject to a performer’s variation on the original text’s situation. Given this, there is ‘no such thing as a definitive Nuh Ibrahim poem, each work exists in the moment it was performed – in different guises – with new lines added, thrown out and changed in performance.’ His poems are thus ‘much like the poet himself who – during his short life – lived and worked in Palestine, Iraq and Bahrain and travelled across the Arab world.’

Zajal’s performance context perhaps suggests why Ibrahim found it conducive to revolutionary expression. Its simple metrical principles, conversational modes, and inclusion of everyday speech make an implicit populist argument. As an oral, improvisational form, zajal also lends anonymity and clandestineness to politically subversive speech. Owen Meredith Tweedy, for example, a Mandate bureaucrat charged with press censorship, prevented the distribution of The Song Collection of Nuh Ibrahim, printed outside of Palestine during the 1936 Arab revolt, under the Mandate’s Emergency Regulation 11, but this did little to quash the viral popularity of Ibrahim’s anti-British and anti-Zionist poems as semi-sung recitations. ‘From Acre Prison,’ perhaps Ibrahim’s best-known composition, continues to circulate.

Of course, there’s little formal correlative between zajal conventions and Ibrahim’s political content. Poets like Ibrahim Tuqan, who penned Palestine’s unofficial national anthem, ‘Mawtini,’ expressed similar nationalist sentiments with a broader range of styles and techniques. It may be, however, that Ibrahim found in zajal a special vehicle for taking the Kafkaesque hypocrisies and brutalities of the Mandate bureaucracies to task. Translations of Ibrahim’s work, scant and hard to read with a sense of the original, enter English transcribed rather than translated with a sense of living language. Wrestling with how to best translate Ibrahim, though, highlights the rhetoric of critique in poems like ‘Your Honour the Royal Commission’ or ‘Mr. Bailey,’ Ibrahim’s address to an unjust Mandate magistrate. With their almost parodic use of bureaucratic language and alienated moral outrage, Ibrahim’s poems align most, at turns, with Christopher Logue, the ‘political’ Auden, and Eliot’s ‘Difficulties of a Statesman.’

Eliot’s Coriolanus, for example, could have presided over Ibrahim’s ‘Royal Commission’ or replaced ‘Your Honour Mr. Bailey’ as ‘Representative of the Northern District,’ declaring that:

The first thing to do is form committees:

The consultative councils, the standing committees committees and sub-committees

One secretary will do for several committees.

What shall I cry?

‘To cry out,’ is at the root the heart of the word, zajal, but so’s its alternate meaning, ‘play.’ For Eliot or Auden in their ‘Coriolan’ modes, the bureaucratic is all-encompassing, stifling. Ibrahim’s ‘Coriolan’ mode, on the other hand, makes subversive sport of Your-Honours. It’s no academic exercise. The stakes are real. A few years after Ibrahim’s death, Christopher Logue also spent several months in Acre Prison after threatening to sell military pay-books to Zionist insurgents. Managerial documents and forms of speech are sites of real risk because they have power over real life. For Ibrahim, using British administrative language in zajal challenges the Mandate to a rhetorical duel, and the Mandate is silent. The enactment of form, in this sense, is an act of ‘local’ liberation within the poem, one that can be replicated within the broader landscape of bureaucratic power, even though it cannot replace it wholesale.

The Palestinian writer, Ghassan Kanafani, shifts between two characterizations of Palestinian writing after the Nakba – adab al-muqawama, or ‘resistance literature,’ and al-adab al-muqawim, ‘literature resisting.’ In the first instance, Ibrahim’s work is a historical example of contending uses of speech. In the second instance, recalling the Mandate’s administrative discourses helps frame present questions. What, for example, is the character of power operating in – and speaking through – Sheikh Jarrah evictions? In Hannah Arendt’s terms, is it a ‘mature bureaucracy,’ unlike the Mandate, one in which there’s ‘nobody left with whom one can argue, to whom one can present grievances?’ Is that its purpose? Simultaneously, what does it mean to think of current grievance in extended terms of the zajal, an old composition with new, evolving iterations?

Mohammed el-Kurd’s first poetry collection, Rifqa, is slated for release this October from Haymarket Books. ‘Poetry, he concedes, ‘doesn’t liberate occupied land.’ For el-Kurd, though, ‘holding a pen’ can seem ‘as forceful as holding a weapon.’ It’s a familiar trope. Seamus Heaney’s ‘Digging,’ for example, opens with the minor epiphany that: ‘between my finger and my thumb / the squat pen rests; snug as a gun.’ In ‘Digging,’ though, Heaney’s speaker can look out his own window, hearing his own father working his own father’s field.