On California’s Central Coast, The Colorful Madonna Inn Is All About Celebrations 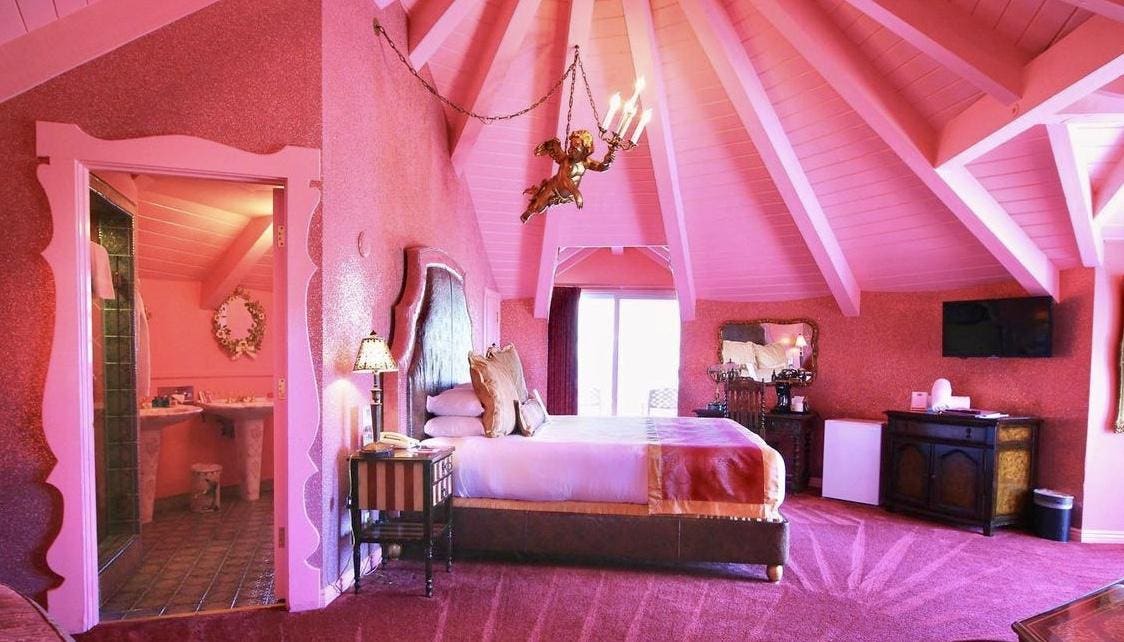 
There’s really no place quite like the Madonna Inn, a wildly entertaining blast from the past that’s been welcoming guests in San Luis Obispo, Calif., for more than 60 years. Its lavishly decorated theme rooms are the setting for countless celebrations. Which is how I ended up there, marking a magical milestone birthday of my only child.

The first thing you’re likely to notice when arriving at this “motor hotel” off Highway 101 is the flamboyant use of color, especially all the PINK. The deep magenta is the signature shade, a hue sometimes flippantly described in travel stories as Pepto Bismol. Not really. It’s more of a psychedelic tea rose.

And Madonna Inn pink is everywhere, starting with some most-requested rooms and the signature soaps continuing in a completely unexpected way. Guests can check out a ball at the front desk to shoot some hoops on the hot pink regulation basketball court. On an Instagram post, the Madonna Inn declares: “Pink is our religion.”

The over-the-top use of that hue was what first caught the eye of my Los Angeles-based grownup kiddo who goes by Butter and prefers they/them as their personal pronouns. Once spotted on social media, this throwback venue made a big impression. “It’s been a dream of mine to stay there for a long time,” Butter told a skeptical mom when laying out the plans. “I love the power of nostalgia and this is a way to revisit a time I’ll never experience any other way. It’s like a funky time capsule.”

So, the planning began.

Every single room and suite has a different theme and a name that reflects its distinctive decor. The elaborate descriptions and colorful photos were studied and carefully considered.

Would it be the ultra-pink Cairn? (Pictured above.) Or the Daisy Mae with the rock waterfall shower? Maybe the Tall & Short, which was originally created for couples of varying heights but has since been updated: “Even though the name remains the same, the room has taken on a new charm suitable for any size and shape.”

The inn was the ambitious vision of the owners, the late Alex Madonna and his wife, Phyllis, who just might have been inspired a bit by the nearby Hearst Castle. But this place was created as an affordable luxury, not some lofty Xanadu. Its location — halfway between Los Angeles and San Francisco — made it a perfect stopping off point when it made its dramatic debut in 1958.

After lots and lots of looking, Butter finally booked two different rooms for a two-night stay. This is a fairly common request and the staff is happy to move luggage between accommodations.

Then, Mom and Dad decided to book a flight to SLO to crash the birthday festivities. Hey, our favorite kid only turns 30 once, right?

The choice of rooms was a no-brainer for this Kelly. It was the Irish Hills all the way. Of course, there’s a cheeky leprechaun statue just inside the front door and vintage portraits from the old country hanging in the bathroom. The eyes of those pipe-smoking gents positively twinkling as they followed you around the room.

The shower and vanity were made using real stones and the shiny gold loveseat is a perfect perch to sit and sip.

There’s an attention to detail that harkens back to another era: ornate lighting and mirrors, scalloped trim around the doors, elaborate wallpaper. Over-the-top kitschy cool yet also super comfy.

When Butter and their partner first entered the Swiss Belle room, it was filled with flowers and gifts and birthday cards from friends and family. The space was warmly illuminated by an elaborate stained glass of a pastoral scene. “It’s like being in a church where they worship cows,” they later told me. Solid wood beams above mimic a sunrise. The rock shower did not disappoint. Expectations exceeded.

It’d be understandable if guests decide to spend the entire stay hanging out in the room. But they’d miss the secret garden — a popular wedding venue — and the dramatic waterfall near the pool that roars to life on the hour and all the amazing flowers.

Everywhere, the well-established landscaping showcases California poppies and wild sage where hummingbirds like to hover. There’s also a huge exotic protea on the grounds that looks like a sunny pin cushion sent straight from Maui.

Follow the winding path up to the pretty infinity pool and sink into a chaise lounge. That’s where we started the birthday fun, ordering smoothies and a fruit plate from the pool bar followed by a massive gooey cinnamon roll from the excellent in-house bakery.

Just beyond the pool and spa area is the Irish Hills Natural Preserve, so the mountain views to the west are uninterrupted. Gazing east that morning, the Coastal Range was wearing its spring green. Feel like a hike? Ask the office for a trail map.

There’s a definite rural vibe surrounding the property. Horses and cattle graze just beyond the guest rooms. Want to ride? It can be arranged.

This country is pretty country and western. Home to Cal Poly, long considered a top-notch ag-centric university, there’s still a strong connection to those rural roots. And there’s no better place to experience that vibe than Alex Madonna’s Gold Rush Steak House.

The beefy menu is a definite throwback. Many dishes date back to the beginning. “Guests wouldn’t want it any other way,” said executive chef Rob Osborne.

Every cut of steak imaginable is cooked on an oak wood fired grill, a tradition specific to this region. The results of that brush with smoke is a full sensory wake up call. Why don’t more restaurants grill meat over an oak flame? Because that’s particular to this area of the Central Coast just like mesquite is to Hill Country barbecue in Texas and pecan wood is to the Mississippi Delta.

While most steakhouses have moved to a la carte options over the years, the Gold Rush remains decidedly old fashioned. There’s a choice of soup or salad with each entree and dinner plates are filled with heaps of food, including the famous gold foil wrapped potatoes. “This isn’t the kind of place where we use tweezers to plate the meals,” Osborne said.

There is a long-time commitment to using local products, though. “We’re constantly looking for ingredients grown within 100 miles,” the chef explained in a recent phone interview.

Service takes an old school approach, as well, with seasoned support staff constantly refilling the jewel tone goblets and whisking away dirty plates as soon as the last bite is finished.

From our roomy booth, we enjoyed the view of fellow diners clinking glasses and blowing out candles. When the cake arrived at our table, everyone groaned because dinner had been so filling. Still, we managed to devour a good bit of that sweet layer cake.

Like all extra special moments in life, it was all over too soon. Butter and I vowed to return and make more memories. Important takeaway: Make reservations well in advance, especially on weekends.