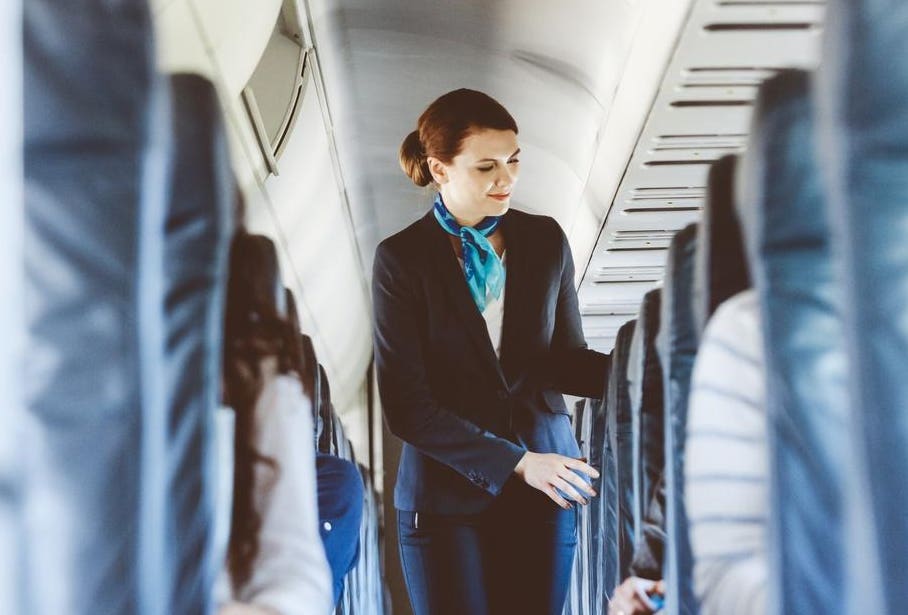 
Being a flight attendant has become a dangerous profession. In the past year, there’s been a sharp uptick in the number of air rage incidents happening on flights, and despite a string of five-figure fines levied against disruptive passengers and some arrests, frequent episodes of unruliness and violence have continued.

Last Sunday, on Southwest Airlines flight 700 from Sacramento to San Diego, a female passenger assaulted a flight attendant, leaving her bloodied and missing two teeth. According to a Dallas Morning News report, the flight attendant had told the passenger to keep her seat belt fastened while the plane was still moving after landing. The passenger then became verbally and physically abusive.

According to the Dallas Morning News, a passenger on the plane posted the following account on Facebook: “As we are pulling up to the gate, a woman in the back row took off her seat belt and stood up. The flight attendant told her to keep her seat belt fastened while we were still moving. What I saw was the flight attendant in the front suddenly start screaming “No, No, No! Stop!” and running toward the back. I thought maybe someone was trying to open the back doors at first, but the woman in the back was attacking the flight attendant, punching her in the head. While the flight attendant was staggering back with a bloody face, we were all told to stay in our seats while they brought in police to remove the unruly passenger. Good grief people. Lady, welcome to the ‘no fly list.’”

Unfortunately, this was far from an isolated incident, as the local Southwest flight attendants’ union was quick to point out. “From April 8 to May 15, there were 477 passenger misconduct incidents on Southwest Airlines aircraft,” wrote Lyn Montgomery, TWU Local 556 President, in a letter to Southwest Airlines CEO Gary Kelly. “This unprecedented number of incidents has reached an intolerable level, with passenger non-compliance events also becoming more aggressive in nature.”

Traditionally, the Federal Aviation Authority (FAA) has handled incidents involving unruly passengers with a variety of methods ranging from warnings and counseling to civil penalties. But last January the agency adopted a much stricter, zero-tolerance policy for passengers who cause disturbances on flights, fail to obey flight crew instructions in violation of the FAA’s regulations or engage in conduct proscribed by federal law.

“Since January 1, 2021, the FAA has received approximately 2,500 reports of unruly behavior by passengers, including about 1,900 reports of passengers refusing to comply with the federal facemask mandate,” said the FAA in an email. “We have identified potential violations in 395 cases and have initiated enforcement action in 30 cases.”

The FAA has not been shy about laying down huge fines for the most egregious perpetrators.

Earlier this month, the agency proposed a $52,500 fine for a Delta passenger who The FAA alleges that a passenger tried to open the cockpit door, repeatedly refused to comply with crew members’ instructions, and struck a flight attendant in the face and pushed him to the floor. Flight attendants, with the help of another passenger, placed plastic handcuffs on the disruptive passenger but he freed himself and struck the flight attendant in the face a second time. The incident happened on Delta Air Lines flight from Honolulu to Seattle on December 23, 2020.

A passenger on a JetBlue flight from Haiti to Boston on January 4, 2021, became unruly after drinking alcohol he had brought with him. According to the FAA statement, the passenger allegedly yelled and waved his hands angrily, and then grabbed two flight attendants by the arms. The incident caused a disruption in the cabin, with crew having to reseat surrounding passengers. When the plane landed, law enforcement officers escorted the passenger off the plane and he faces a fine of $31,750.

And a Delta passenger who was caught on camera punching a Delta flight attendant in the face over a dispute about wearing face masks was hit with a $27,500 penalty.

“The freedom of flight depends on all of us following the rules and treating others with respect,” said Sara Nelson, president of the Association of Flight Attendants-CWA International, which represents nearly 50,000 flight attendants at 17 airlines. “Flight Attendants are charged with the safety, health, and security of everyone in the cabin. Our instructions to the traveling public keep everyone safe. Listen up and do your part. The consequences are steep if you do not and the FAA isn’t playing around on this.”

“The passenger repeatedly ignored standard inflight instructions (tray table in upright position, seat belt, etc.) and became verbally and physically abusive upon landing,” said Chris Mainz, a Southwest Airlines spokesperson. “Law Enforcement Officials (LEOs) were requested to meet the flight upon arrival, and the passenger was taken into custody. We do not condone or tolerate verbal or physical abuse of our Flight Crews, who are responsible for the safety of our passengers.”

But Southwest flight attendants want their airline to do more to educate the public. “One tool to better utilize would be the Southwest Airlines restricted travelers list,” wrote Montgomery to Kelly. “The flying public needs to understand that egregious behavior will result in being banned from flying with Southwest Airlines. Our airline should deliver education on the associated civil penalties, criminal charges and possible imprisonment under federal law for abusers.”

- Advertisement -
Share
Facebook
Twitter
Pinterest
WhatsApp
Previous articleIs Your Car Lease Coming Due? Here’s How To Leverage Lofty Trade-In Values And Turn A Profit On The Deal
Next articleBrian Ritchie On Vinyl Reissue Of Violent Femmes ‘Add It Up’ Compilation, Festival Curation
- Advertisement -